Wild hare pot pies… Not something you come across that often.

This is kind of a long and funny story – and a surprisingly delicious dish!

I suppose the idea of wild hare should sit comfortably with me, seeing as we eat a lot of game and venison.

But you see, my husband doesn’t hunt himself and I certainly don’t see any meat resembling any animals…

{*This is probably where I should warn off any squeamish readers…}

We have friends that hunt and then we place our orders…

I receive responsibly hunted venison and game, packaged beautifully as if it had come from a store.

I enjoy the taste and health benefits of venison and it’s also good for my conscience, but to be honest, that’s as close to ‘caveman’ as I’ll ever get.

I don’t want to actually see the animal in its whole form – not before or after it’s killed.

Right, so now that you have a bit of a background picture, here’s the deal with the hare:

We live on a fairly large stand in a country estate, surrounded by beautiful countryside and wild-ish animals.
We hear jackal at night in the field close-by and we have regular owl visitors.
We keep our own chickens {for eggs} and we have a Rhodesian Ridgeback that fancies himself to be quite the hunter, although he never bothers with the chickens. They’re his ‘cousins’…
We often get wild hares or jack-rabbits {I don’t know the species exactly, but it’s NOT a bunny rabbit…} on the property and they always manage to escape by the fluff of their tails {literally}.

One fateful day last week, we’re enjoying a leisurely get-together with some friends, when Rhulani {the Ridgeback} suddenly gets a whiff of his nemesis the hare and sets off on the hunt.

Next moment, he had the poor hare by the scruff of his neck and delivered the ‘kiss of death’…

The guys were quite shocked that he managed to catch the hare in the first place, but immediately took it from him.

Well, as it happened, our friend is a regular hunter and knew exactly what to do.

Long story short, the hare was skinned and prepped and ceremoniously dumped in my fridge… {EEEEK}

What was I to do with this poor ol’ hare?!

Thanks to Google and Pinterest, I put together a game-plan and here’s how it went down:

And finally, let’s get to the recipe for these surprisingly delicious pot pies:

So – would I prepare and eat wild hare again? Sure!!

I was truly surprised by it; it was pleasant to work with, smelled delicious as it was cooking, and most importantly it tasted amazing!

Have you ever tried? I’d love to hear your experience!! 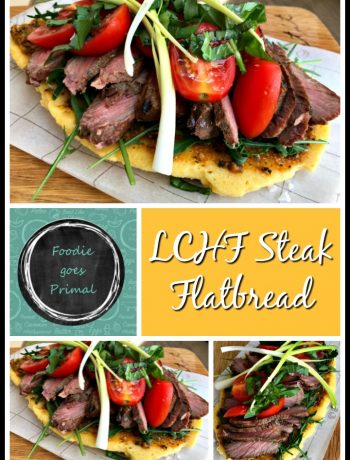 Hi Guys! Welcome to my recipe and lifestyle blog - Foodie goes Primal. My name is Heidi and I love to entertain & cook simple and wholesome food that is also low carb. I hope you enjoy the recipes! x
Read More...